The International Space Station is a habitable artificial satellite launched in 1988, that orbits the Earth 400km above our heads. It doesn’t look that much, but remember space starts at Karman line only 100km away upright… that’s where the atmosphere becomes too thin to support aeronautical flight. The Gravitational strength in the ISS compared to the surface of the Earth is 89%

Why does it seem the ISS has no gravity?

The ISS serves as a microgravity and space environment research laboratory in which crewmembers conduct experiments. The effective gravity inside the ISS is very close to zero, because both astronauts and the station itself are simultaneously falling down.

The ISS never hits the ground because its horizontal speed (27000Km/h, it completes 15.50 orbits per day). When the Station has fallen 1 meter, because of this horizontal speed and the fact that the Earth’s surface is curved, the ground is 1 meter farther down as well. The lack of gravity makes everyday activities not so ordinary.

Astronaut’s food and drinks are dehydrated or freeze-dried, and packaged to prevent spoiling. Then they are stored in lockers to ensure they do not float away.

The astronauts add water from a dispenser to rehydrate the food and they heat it in a convection oven. Since astronauts themselves can float away while they eat, they first attach themselves to the table. Then they attach their food containers to trays with velcro and the trays are connected to the wall or to their laps in order to secure them.

Some foods are avoided because even though they are perfectly innocuous on Earth they can be dangerous in space. Bread crumbs for example, could float into an astronaut’s nose and get inhaled, so they use tortillas. Salt and pepper are dispensed as liquids because powder could affect the equipment onboard.

Astronauts change their shirts, socks and underwear every two days, and their pants once a week. Because there is no washing machine available, their clothes become disposable.

Washing up in space can be a challenge. Astronauts take showers in a big cylinder that is enclosed by a plastic sleeve to prevent the water from floating away. They use a wet, soapy washcloth to wash themselves, rinse with a wet washcloth and use a vacuum hose to suck up all the water from their skin.

To wash their hair they use a rinseless shampoo. Karen Nyberg combines this shampoo with a little amount of water directly on her scalp and combs her hair up.

Even if you are orbiting above the Earth when nature calls, you have to listen. But when you are in zero gravity something as simple as going to the bathroom can turn into a major challenge.

Each spacecraft is equipped with a toilet. (The ISS has 2 of them) designed to be used differently for number 1 and number 2.

To prevent the astronauts from floating away the toilet comes equipped with foot restraints for sitting and a toe bar to slip the feet under for standing. The toilet also has a bar similar to the one that pulls down over your lap when you ride a roller coaster.

Because of the low gravity environment, the toilets onboard use air instead of water to flush. When you have to do number 1 there is a hose that absorbs the liquid like a vacuum cleaner. It’s designed with different endings to adapt both male and female anatomy making possible for both of them to use it standing up.

Performing a number 2 is a bit more complicated. They have this toilet that looks like a regular one with a plastic bag inside and a smaller hole. The hole is only 30cm so alignment is very important! In fact, it is so important that it exist a training module at NASA facilities exists with a camera and a screen so astronauts can train to align themselves.

Once you are aligned and you start doing your business a surprise happens. The astronaut Richard Garriot explains the situation explaining that you cannot train this on Earth because the lack of gravity makes everything different. He uses this metaphor to describe it:

“…When you are on Earth squeezing a tube paste over the sink, toothpaste will come

out, gravity will curve it down toward the sink, and when a few grams of it are

hanging out of the toothpaste tube it will break off and fall in the sink.  If you do

the same experiment in space, you squeeze the tube of toothpaste, a few grams

will come out, and will just hang there. So you squeeze more and more grams will

come out.  And if you try to pull the toothpaste tube away it will all come with you…“

Astronauts have to bounce so the movement breaks things for them.

Once the bag is filled it’s released from the space station with other trash in capsules that burn up in the atmosphere letting us a beautiful shooting star.

In the case of the Apollo 15, they left lots of stuff on the moon. If you read the list you can check they released used sanitary bags. So, yeah, there is poop on the Moon! 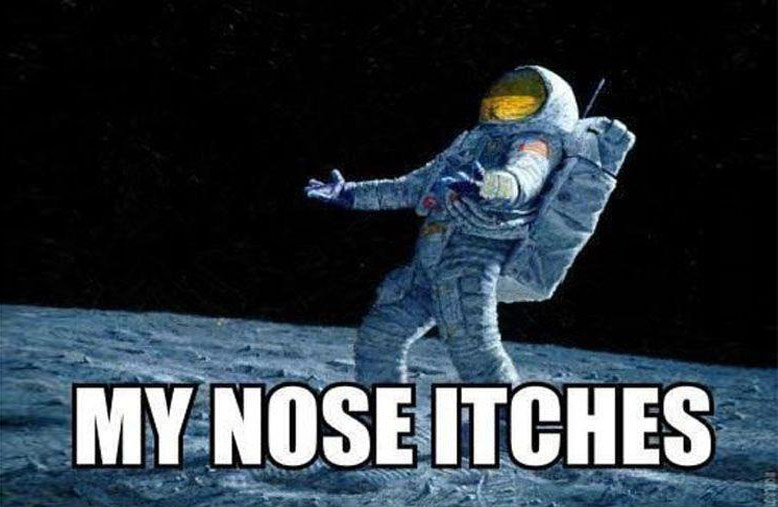 Everybody knows that to leave the station an astronaut must wear a space suit that provides protection from the dangerously low pressure of outer space. But there are some curiosities that makes this 12$ million outfit not so glamorous.
– A spacewalk may last even 8 hours and astronauts can’t just knock off for a bathroom break so they must wear adult diapers. The astronaut disposes the bag when the spacewalk is over and he/she gets dressed in regular work clothes.

– You can’t just take the helmet off to scratch a simple itch on your nose. To remedy this, a velcro patch is stuck on the inside to serve as a scratcher.

– There is a cereal bar in the helmet. The entire bar must be eaten at once to prevent crumbs from floating within the helmet. However, most astronauts prefer to eat prior to the spacewalk and not use this bar.

– The space suit has a plastic bag with 22 litres of water and a straw next to the astronaut’s mouth so the astronaut can suck water through the tube.